The concept of the toxic set is a basis for many Sudoku elimination methods. The name is applied to a set of candidates of the same value that can be shown to contain one or more true candidates, i.e. placements in a unique solution.  Any outside candidate “seeing” the entire set is removed, because no clues can see each other.

The term traditionally used for some forms of toxic set is “locked”. When a unit’s candidates of n values are contained in n cells, the hidden subset is locked. Each value is locked in, because each of the cell must have a unique value. Even if the set is subset is not the full unit, any outside candidate seeing all candidates of its value in the subset is false.

A set of n cells in a unit that contains all candidates of exactly n+1 values is an “almost locked set” or ALS. Every bv is an ALS. Now how is it that two ALS that partially share value sets of  a unit can generate a toxic set.

In traditional terms, the vision channel is a restricted common (RC). That means that at least one of the ALS will eventually give up its black values and will be locked, meaning it will have a blue, a red and a green solution candidate.

There’s a lot we don’t know. But we do know if there is a restricted common,  all the shared candidates of other values are toxic sets.

It doesn’t matter which ALS is locked, the victim sees both shared sets.  Candidates in one ALS don’t have to see candidates in the other. Except for black. It doesn’t matter if there are red, blue and green candidates outside the two ALS. In fact, that’s where many victims are. But the deal is off if a black candidate sees both shared black sets, because it may be true, making both ALS lose the same value and remain almost locked.  Black is the restricted common value.

In real life, it doesn’t happen frequently. ALS are plentiful, but to find these toxic sets with a human scale search,  you have to look in just the right places. In his introduction to Almost Locked Sets in The Logic of Sudoku, Andrew Stuart illustrates a very “right place”. 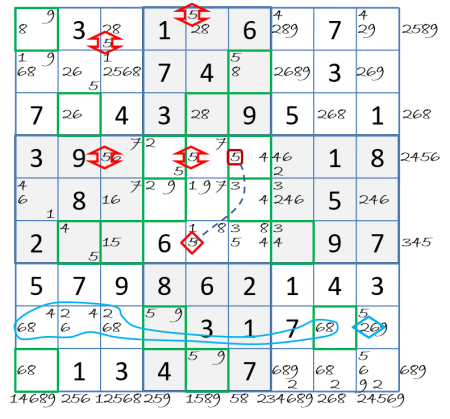 Andrew’s illustration, Figure 29.1 comes after this action on the line marked grid, which Andrew left to the reader. 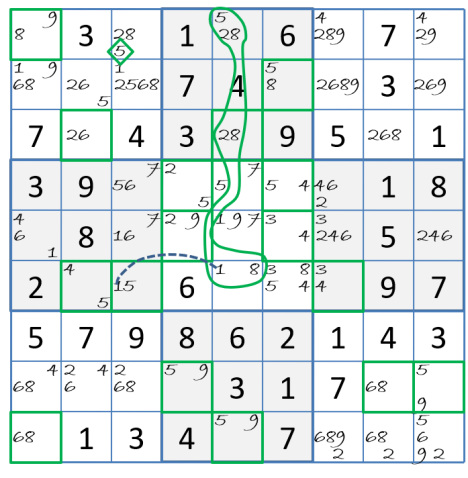 .  .  . a four valued ALS with single candidates of two values, near a bv of those same values. Those conditions make “seeing all . . .  in both” easy.  Sure enough, the 1’s see each other, forming a “restricted common”.  The other shared, but uncommon value 5, is locked.

The combination of a bv and a larger ALS is appropriately labeled an ALS-XZ.  Conditions are stricter than the BARN, but it covers more. Here, in fact, the two ALS are not in a bent region. On the other hand, many BARNS are also ALS_XZ similar to this one.

Like many Sudoku techniques, knowing why they work doesn’t tell you how to spot effective ALS_XZ among the candidates on the busy grid.  Here is a Sysudoku technique for directing your attention to promising cases, known here as ALS partnering.

Transcribing Logic Figure 29.2 into Sysudoku slink marking, the blue ALS is seen to have two single candidate values, 1 and 5. Building out along r2 from a possible grouped restricted common, we add the bv 25 cell without increasing the number of values, to get an elimination partner ALS.

If there’s no immediate collapse, we might realize that the said grouped restricted common also works for another partner.

For those just arrived from the bent family guide page, this second ALS toxic set example is also a 5-set BARN or BNS1.

Lest your scan be confined to neighboring lines, here’s one last ALS_XZ, found by the ALS_XZ sleuth of  Sysudoku, Gordon Fick. It’s #200 from the review of More Extreme Sudoku by Antoine Alary. Another grouped restricted common, and amazingly enough, another BARN/BNS1, and starved crocodile ready to eat my words.

From these examples you can see what the ideal ALS_XZ partner looks like. It has a one value matching candidate or boxed group. After the easier bv, X-panel scans and coloring, and before the AIC scan, Sysudoku may soon recommend a pre-partnering ALS mapping, to mark every ALS having at least two singles or box restricted groups.  I will be trying for examples from the reviews.

OK, are you back?  I have one more startling fact to share. Suppose there are two values in restricted common between the two ALS.

That is possible. Here is Fick’s double common ALS_XZ on More 200, occurring right after the crocodile above. With double commons, every uncommon value in each ALS is locked. Double independent smaller sized toxic sets. Why? Each ALS loses a value to the RC and becomes n values for n cells. Now 6r9c5 is shut out. But not 8r1c8. The common values are now 8 and 7.  Cool?