The XYZ-wing is a well known but too seldom found elimination method, based on the toxic set, a set of candidates that must contain a true one. The reason for the bad spotting statistics is generally self-imposed limitations on “seeing”, that is, recognizing the needed weak link.

Here is the problem. The XYZ wing is defined as a combination of a hinge cell of three candidates and two bv sharing its values, and connecting weak links.

Outside the confines of the Sudoku grid, the wing looks like the left figure. The Z-candidates are a toxic set, because if both wing Z’s are not true, the hinge Z must be.  If an outside Z-candidate sees all three, it cannot be true.

Confined to the grid, however the “seeing” dashed winks are restricted. If candidates have to be in the same box or line to “see” each other, a productive XYZ doesn’t happen often.

If both wings are outside the box of the hinge, it doesn’t happen at all. Where can you put a Z to see all three at left?  When you move hinge and wings around, but keep wings out of the box, it only gets worse.

Move one wing inside the box, and you have two box cells where a Z can’t stay. On the right, one version of that.

And again on the left, another. Only two? Check it out

Of course, if both wings are in the box or line with the hinge, it’s not an XYZ-wing, but a naked triple.

So actually, the XYZ-wing is a bent method. I’ve reported Robert Hanson’s explanation that his Sudoku Assistant looks for it as a three-cell BNS 0.

For my part, in my second month Sysudoku, in November 2011, the XYZ wing was the first opportunity to show why the Alternate Inference Chains expand opportunities for constructing method formations and allowing them more victims.

Here is the regular 347-wing. Note the Z =7 is written last. You could say the bent region is C6.  The hinge cell is highlighted wing winks are dashed curves. Check out the BNS0 and BARN conditions.

You might notice a regular XYZ  in the bv scan for Sue de Coq, APE, and the Bents. But if not, you will definitely pick it up on this more systematic scan designed to find them all.

The first step is to transfer all the bv to a bv map, shaped like the grid but showing nothing but the bv. Mine is a ©Word table. Then I make a copy and call it the XYZ map. Here is my XYZ map as I start the More 4 XYZ scan.

Let’s say I did spot the regular 347-wing before loading the map. I might just add the hinge at r4c5  for the record. But the map is actually for the discovery of wings and victims with inference chains for weak links.

First I scan the map for a XYZ hinge with the candidates of XZ and YZ wings on the map. Anywhere on the map. Going left to right row by row, there are very few potential hinges. Cell r1c2 has 247, and there are many 47’s. But no 24 or 27. A cell needs two of three hinge candidates in at least one wing cell to get on the map.

When you are that well focused on two points, it’s just a question of patience, not skill, to find a chain wink. You show it to someone, and they say. “How did you ever see that?” You could be honest, and say “I didn’t see it until it happened.” Or you could let them think you’re a genius.  Can’t hurt.

It doesn’t matter what kind of inference chain you use, but mostly its going to be a single value chain, an X-chain, X being the starting and ending value.

In this case, after noticing the 47 wing in r9c1,  I was heading north and saw the 3-slink on r4, connecting to a 3-wink to r1c1. By attaching a wing by an inference chain wink, we have created an i347-wing.  The rounded squares mark the toxic set, and 7r6c1 sees all three.

Now the question becomes: Do any more of the many 7’s see all of that toxic set? Human solvers lack the patience to find them all, but experience and reasonable persistence goes a long way. 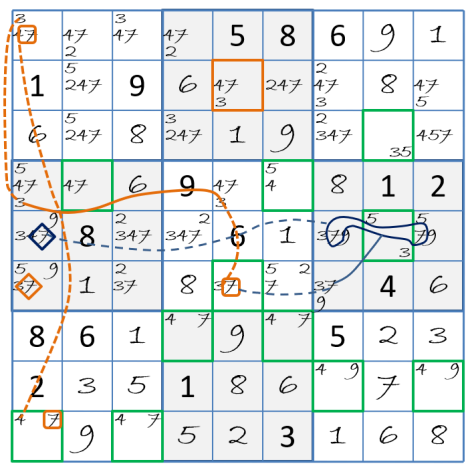 Here I’m starting from 7-candidates that see two toxic 7’s, to find a path to the third.  Going up c1, 7r5c1 looks at the E box as a mirror.  An incoming wink in r5 comes out on r6 to see 7r6c5, and doom 7r5c1. These so called Empty Rectangle or ER boxes are based on the idea of grouping.

More precisely, 7r5c1 sees a 7-group in E. Winks and slinks work a little differently with groups. A group is true if one of its members is true, and is false if none of its members are true. Now if 7r5c1 is true, the group is false, but the group then forms a slink with 7r6c7, allowing it see the toxic member 7r6c5 and complete the inference wink. My blog post devoted to grouped X-chains was Group Therapy, February 28, 2012.

On More Extreme 4, I moved on here, as posted on 2/17/15. The XYZ map after the scan leaves a record of hinges rejected, including one WXYZ hinge. The bv were so concentrated on 3457 that no other hinges even qualified for an AIC wing.

If you’ve just come from the Bent Methods page of the guide, you might have noted the 3457 4-sets that fail to qualify for BNS or BARN status.

When looking for wings for the WXYZ hinge at r4c1, I’m trying to complete the “classic” WXYZ wing, that looks like this:

It is a direct extension of the XYZ wing, with an extra wing. Now the potential victim has to see four Z-candidates. It happens rarely, and when winks are limited to candidates in the same box or line, only if the WXYZ is also a       .  .  . wait for it .  .  .  BARN!

The possible Bent Almost Restricted 4-set, BNS layouts are detailed in a sudoku 9981 page, which, unfortunately, repeats an example from the sudopedia.enjoysudoku.com mirror of the destroyed sudopedia site. 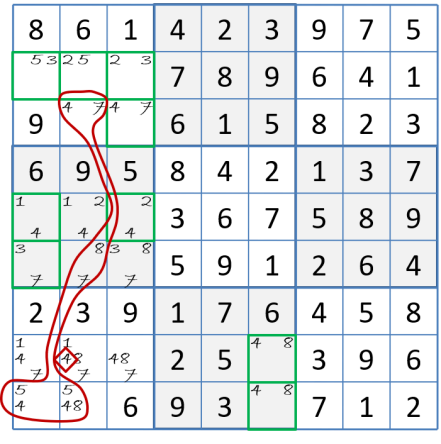 What we get is a BARN or BNS1 locking the 4’s. The four cells of the 4-set are highlighted, but the separation into hinge and wings has been lost, and with it, the original rationale that parallels the XYZ.

It’s easy to see how coding expert opinion drifted from the classic WXYZ, but with the BNS1 and BARN available for forum attention, that is being put right. More recently,  a forum thread on the BARN was conceded that Sysudoku title, in place of WXYZ,  by its originator StrmCkr. Its bent region companions, the BNS1 and BNS0 and it’s relationship with the generalized Sue de Coq are also suitable topics for forum discussion.

As the example shows, the main point of departure is the dissolution of the hinge. This is where the WXYZ and BARN should part company, allowing the WXYZ the space to extend by inference chain winks, beyond the bent region. Expansion by inference chain is not a favored subject among coding experts, because it is very difficult. The replication of the most elemental human vision and intuition requires mountains of tedious computer code.

The current Strategies page on Andrew Stuart’s sudokuwiki.org crosses the line in full view. His first WXYZ example, covered in my August 2015 post, is a classic, and shows how an ALS can supply two wings. His challenging fourth example will be checkpointed in the usual Sysudoku way in April 2018. Andrew’s second is a conceptual copy of the above, and all but the first belong in a separate Bent section, as they abandon the hinge and wing model of the WXYZ.

If you have a real WXYZ, or iWXYZ, WXYZi, or iWXYZi, please comment for inclusion here. As for the WXYZ in everyday sysudokie practice, however, you’ll find a lot more bent family eliminations.