Solving techniques with names, like X-wing, Sue de Coq and Unique Rectangle, are applied in the  Advanced stage following Basic. They are defined by relationships among clues, the current placements, and the candidates. Basic is the stage in which the candidates for each unsolved cell are identified and posted on the grid. Advanced techniques are then applied to remove candidates and make more placements, until all cells are filled.

Sysudoku approaches the basic stage differently. Most Sudoku writers ignore it, assuming you already have the candidates allowed by the given clues. The method most assume you begin with, either by computer or by hand, is to eliminate every given value in a cell’s box, row or column, taking all remaining values as candidates. Here we call that the number scan.

The number scan is the simplest logic possible, and many beginners invent it for themselves. But there is a cost to generating all candidates before removals begin. Some removals are obvious, following simple rules. Some are detectable by looking ahead a few steps. That means the number scan is inefficient. It requires removal of many candidates that we can easily avoid generating. The number scan is also poor human engineering. It is boring, unrelated to the challenge of Sudoku and its cloud of unnecessary candidates obscures relationships that basic and advanced techniques rely on. 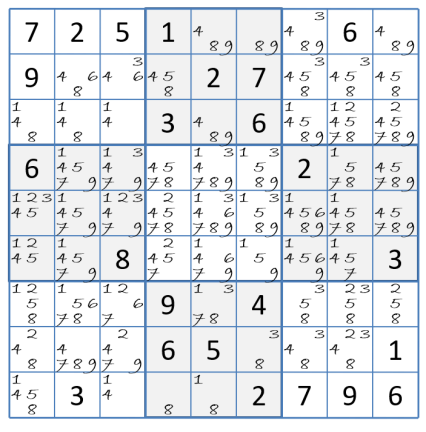 Here is the puzzle you will be invited to walk through on the Begin With the Bypass page, as number scanned by Andrew Stuart’s Sudokuwiki solver. It’s a 5-star Sunday puzzle solved early in Basic. One cell has a single candidate, and that clue leads to several others.

Subsets and the Bypass

Sysudoku Basic is in every way the opposite of the number scan. It follows the advice of Wayne Gould, a well known Sudoku composer, who said, ”If you are writing too many pencil marks, it means you are not understanding how the puzzle works.” Sysudoku Basic is designed to find the more new clues with fewer candidates.  Placements begin immediately. Clues are placed and candidates are removed throughout Basic. Less clutter and more fun.

Sysudoku Basic begins with the bypass, a way to find clues and other subsets, with clues and other subsets. A subset is a set of n cells in a box or line, containing all candidates of n values in a box or a line. No other values can be placed in the subset cells, because these cells must be reserved for (a.k.a. claim) the n values. A clue is a subset of n = 1. In the grid above, there is a subset of 3 cells reserving 4, 8 and 9 for itself, leaving 5 as a clue. Want to find it? Subsets of n = 2, 3, and 4 are called pairs, triples or triplets, and quads, respectively.

Following the “more clues with fewer candidates” principle, only the pencil marks of subsets are written on the grid in the bypass. Number scanners miss entirely the pre-challenge of Sudoku to find the most subsets with the least candidates.

In this walkthrough snapshot, we are well underway in the bypass. There are four pencil marks so far. The subset is a naked pair 48. The subset of the box is also a subset in row 3, preventing 4 and 8 candidates in four cells.

The terms naked and hidden describe how a subset is used for eliminating candidates. A naked subset contains only the values it reserves, while a hidden subset contains other values that will not be allowed to stay.

The number scan only lists candidates. By abandoning its redundant keypad arrangement of candidates within the cell, Sysudoku Basic does much more to prepare for the Advanced methods required for harder puzzles.  Strong links between candidates are marked as they are discovered. A strong link, a.k.a. slink in Sysudoku, is a logical relationship between two candidates that guarantees that at least one of them is a true placement in the solution. If one slink partner proved false, the other must be true.

Strong links are components of many advanced methods. A frequently encountered slink is the one between the only two candidates of the same value in a box or a line. The unit must contain one of these candidates.  A slink is also present in every bi-value cell.  These are cells of exactly two values, known in Sysudoku as bv.

The full name of the bypass is the slink marking bypass. The two stages following the bypass write in the slink partners with pencil marks. In the bypass, slinks are recognized and used to make candidate eliminations and find clues and other subsets, but only the clues and subsets are written in.

The mind sees the effects of slinks much more readily when not interrupted by writing them down. We see them again and write them down only for puzzles that survive to see the next two stages of Sysudoku Basic

The second stage of Basic, box marking, concentrates on the unfilled cells in each box in turn, and values excluded from the box by outside clues, slinks, and aligned triples.  An aligned triple is a set of three candidates of the same value in a box that are confined to one line.

Box marking is focused on one value at a time. If there is only one cell left unclaimed by outside clues, slinks and aligned triples of a value, then a placement is made of that value. Slink marking gives a second option. Two uncle aimed cells identify a box slink of the value. Three unclaimed cells in the same line identify third option, an aligned triple. Any of these add to the restriction of placements in other boxes.

Cells with two candidates only, the bv, are a valued resource in advanced methods, due to their built-in slink. In Sysudoku published grids, bv are marked with green cell borders.

Above is the line marked grid of James Forest’s Classic 48, recently reviewed.

The givens are supplemented by 17 clues, and six more placements are locked into three naked pairs, subsets of two values confined to two cells.

Slinks are marked by pencil marks at the top, and the bottom corners of cells. If you’re new to Sysudoku, use this example grid to figure out how box, row and column slinks are distinguished in slink marking. Your analysis will be confirmed on the Box Marking page.

The red arrow symbols  in r2 and r5 mark an 8-wing, an advanced elimination method that is easily spotted in line marking because the marking action makes X-wings immediately easy to spot. Here, the 8-wing found too early for eliminations was left to avoid adding candidates destined to be eliminated from lines marked later.  Very much in the practical spirit of Sysudoku Basic.

So is the positioning of pencil marks. Look again at that first diagram of number scanned candidates. Notice how the logical information highlighted  in the line marked diagram is obscured in the keypad cloud. Note how wasteful it is to be digging this information out of the keypad display, as it gradually melts away. The same values are reported twice. Once by symbol and again by position. Sysudoku uses position for useful information.

Sysudoku pages and posts give readers a compact record of basic moves, a basic trace.  With this trace, and a grid diagram, the reader can step through the exact Basic path, seeing the current grid as every move is made. Even better, no explanation is given for any move in the trace. This saves space, but it means that explaining is done by the reader, an ideal situation for gaining solving experience.

Although tracing is very useful when you are sharing solving logic with others, or uncovering where you went wrong when a contradiction occurs, this doesn’t mean that trace writing is a normal part of Sudoku solving. Conventions are observed so that readers can write traces that match with Sysudoku traces for confirmation. These are described in the Sysudoku Traces page on the menu bar. But you don’t need to know them to read Sysudoku traces. The simple rules of trace reading are covered in the walk through example of Begin with the Bypass.

Sysudoku Basic prepares for exploration and enjoyment of Sudoku of all levels. Please continue down the pyramid of pages of this Guide, starting with the walkthrough introduction to tracing and the bypass.