In the bypass, aligned box slinks and aligned triples join clues as “sweepers” in dublexes and crosshatches. Box marking highlights them as a visual aid in solving. Combinations of pencil marks of different values become more explicit with box and line marking, sometimes creating more clues and subsets.

Sysudoku uses cell position to mark slinks and aligned triples. Here is another plaque on a Sysudoku wall, showing the full map of slink marking positions within the cell.

Box slink partners are recorded as pencil marks in the same position at the top of two cells of their box. Row slinks are posted in a list on the left bottom corner, and column slinks are listed on the right bottom corner. The lists are most often a single digit.

If a candidate is a partner in multiple slinks, it’s box slink position takes precedent.  If it’s both a row and a column slink partner, then in the cell aligned with both slinks, it is shifted along the bottom to the middle.

An aligned triple is marked as a candidate in three aligned cells of the box. If the intersecting line is a row, the three candidates are centered on the bottom edge of the cell; if a column, the right edge of the cell.

An aligned triple sweeps its line in adjacent boxes because one of its candidates must be true in the box, and and therefore in its line.

Here is an example from review puzzle II-49, from Sudoku Road to Mastery, by Moito Publishing.  The bypass gained only the clue E4 and the unresolved 3-fill c5[135].

Note how the subset S69 and the North box 9-slink depend on each other.  You mignt spot this connection and add the subset in the bypass, but it is much better accounted for in box marking.

The box marking trace to this point:

The box marking trace is normally 9 lists of boxes, one for each value. A list is skipped if all boxes contain a clue of that value.

The value heads each list , and is therefore omitted within the list. The letter t marks an aligned triple. When no slinks of the list value are found, the heading is still included.

In follow up, slinks of value other than the list value occur, and are distinguished by adding the value, followed by the letter m.  Earlier posts added the m to list value slinks

It so happens that a collapse follows. You might like to take it from the two clues above, and then compare your path with a Sysudoku trace. OK, good. I just happen to have one.

In box marking follow ups, line slinks show up, like the r6s36 in line 4. This is corresponds to the S69 subset notation for a box. Since the line designation ends in a digit, the s is inserted to divide two numbers. The letter s stands for “subset”,  but reading the trace, the meaning of r6s36 is clear.

On the last leg down, Wht257 refers to the hidden triple in the W box. The box slinks fix candidates of four numbers on 4 cells. Three of those numbers are confined to three cells. it’s a hidden triple. Those three cells must hold 2, 5 and 7 in the solution, and 3 cannot be in r4c1, and must go into r4c3.

The example shows that slink marking can generate hidden subsets as well as naked ones, like the naked pairs SW48 and S69. .

Many times, box marking is simply routine preparation for line marking and advanced methods. But like this Moito example shows, box marking can finish puzzles in interesting ways. 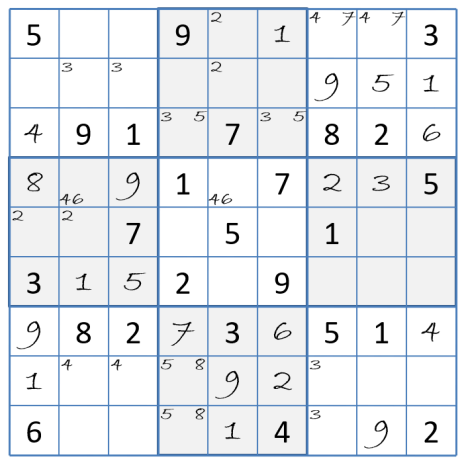 Row slinks, column slinks, and other non-slink candidates are identified in the line marking process following box marking, and described on the Line Marking Guide page.