Systematic Sudoku applies human engineering principles to a game, Sudoku solving, with the goal of making it a more pleasurable and more widely used mentally therapeutic activity. Techniques of basic candidate identification, and advanced value placement were described in detail in the first year of the Sysudoku blog, and now in an accessible set of pages, the Guide. There is a systematic process order, the Sysudoku Order of Battle (SORB), designed to concentrate human attention in a generally efficient way.

To further this goal, Sysudoku reviews both the writings of Sysudoku  authors and collections of Sudoku puzzles, as they become available.  The expert reviews attempt to evaluate claims and theories about human Sudoku solving from a human engineering perspective.  In Sudoku, as in current life, this involves judgement as to what is practical for human solving, as opposed to measures only practical in solving by computer coded algorithms.

The objective in collection reviews is to rate collections in order of difficulty, and to provide realistic examples to show readers what is to be gained in playing the Sudoku game efficiently and at more advanced levels.

Ratings by Sudoku publishers are subjective and unreliable.  Terms like Very Hard, Extreme, Fiendish, Diabolical, or Nasty are meaningless.  The Sysudoku Order of Battle does provide a fair way out. It is to report a Sysudoku solution path in a way that can be accurately followed. The collection’s difficulty can then be judged by the reader by how far a representative set of puzzles get before collapsing into its solution.

That sounds good, but in order for readers at every level to make comparisons, the reports must be accessible at a glance. That is reason for the

The drag off page is a list of collection review tables for all the puzzle reviews. How far you would go from left to right depends on your level of difficulty. Here is a current table: 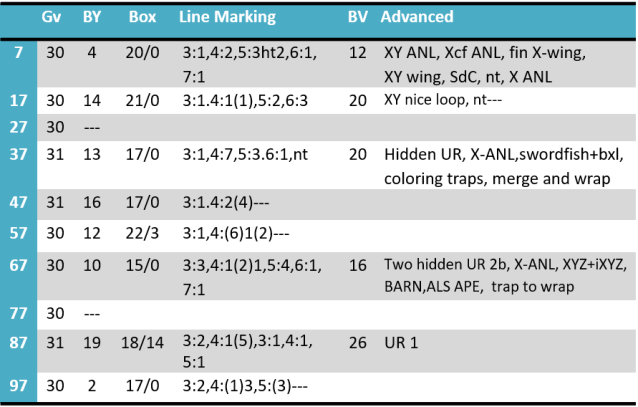 The left, highlighted column identifies the puzzle number or difficulty rating within the collection.

Gv  is  the number of givens, of interest to some readers, but not in itself a measure of difficulty.

BY  is a number of primary interest to beginning sysudokies, the number of cells reserved in the bypass for specified values, i.e. for subsets, including clues. In any column, the code – – – signals a collapse. Two review puzzles collapse in the bypass in the sample table above.

Line is a tally of the line marking. It’s a set of lists, separated by commas.  Each list is headed by the number of free (unreserved) cells on the line, followed by a colon.  Lines are marked in increasing order of free cells, taking easier markings first. Changes in a marked line are followed up immediately, and can change the order of marking of remaining lines. List heading numbers can therefore decrease, but generally decrease.

When a line marking results in slinks or aligned triples and clues, this result is recorded in parentheses as (slinks, cells reserved) or (cells reserved), without an event code or immediately after one. If the hidden triple above had resulted in three slinks and two clues, the 5 free cell list would have been written 5:3ht(3,2)2. If instead, it had produced 4 clues and no slinks or aligned triples, the list would read 5:3nt(4). If it was 2 slinks and no clues, the list would be 5:3ht(2,0)2.

And under the heading BV is the number of bi-value cells (bv) left by line marking.  Early advanced methods depend on the bv field.

The rightmost column contains brief descriptions of advanced and extreme methods employed for the solution. The order of these methods change in response to results, but generally follows the Order of Battle stages:

Medusa coloring and bridging as available.